This section has been created in order to keep track of the conferences attended by the CBG members. 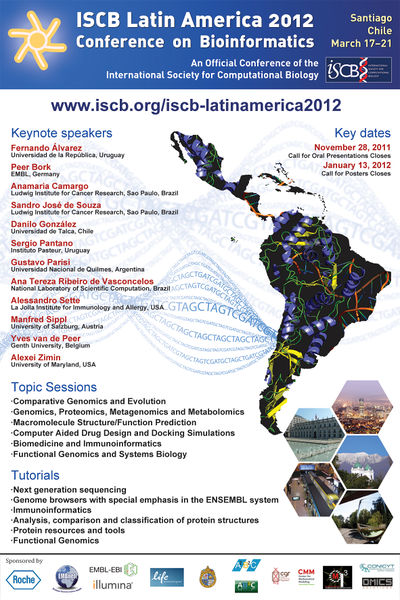 The International Society for Computational Biology (ISCB) has held the ISCB Latin America Conference on Bioinformatics in Santiago, Chile, in March 17-21, 2012. This meeting constituted the second regional ISCB Latin America meeting, with the first held in Montevideo, Uruguay, in March 2010.

Conferences are key to the development and exchange of new ideas in science. Over the years many thousands of participants have attended ISCB’s annual ISMB conferences. As the majority of those attendees do their research in North America and Europe, the ISCB Regional Conferences aim to break the barrier imposed by high cost travel. How? By bringing a high quality conference, including lectures delivered by world-renowned scientists, to the regions of Latin America, Africa and Asia.

Toward this aim, in 2009 ISCB began organizing a newer series of smaller, regionally-based meetings as part of its mission to advance the science through world-wide education and training activities. These regional meetings have included ISCB-Africa (Mali 2009, South Africa 2011), ISCB-Latin America (Uruguay 2010) and ISCB-Asia (Malaysia 2011).

ISCB also aims to provide more students the opportunity to discuss and participate in the latest developments in bioinformatics and computational biology by bringing these meetings closer to home. We hope the ISCB-Latin America 2012 has been the second of many conferences that will contribute to the growth of the field within this region and support scientific innovation across Latin America.

More than 250 people attended, primarily from countries in Latin America.

The first two days of the meeting (March 17-18) were dedicated to hands-on practical tutorials and workshops covering different topics of interest.

Session I. Comparative Genomics and Evolution

The programme book of the conference

F1000 Poster: the open repository for posters and slides

Poster presented at the conference

To facilitate the study of interactions between proteins and chemicals, we have created STITCH, an aggregated database of interactions connecting over 300 000 chemicals and 2.6 million proteins from 1133 organisms. Compared to the previous version, the number of chemicals with interactions and the number of high-confidence interactions both increase 4-fold. The database can be accessed interactively through a web interface, displaying interactions in an integrated network view. It is also available for computational studies through downloadable files and an API. As an extension in the current version, we offer the option to switch between two levels of detail, namely whether stereoisomers of a given compound are shown as a merged entity or as separate entities. Separate display of stereoisomers is necessary, for example, for carbohydrates and chiral drugs. Combining the isomers increases the coverage, as interaction databases and publications found through text mining will often refer to compounds without specifying the stereoisomer. The database is accessible at http://stitch.embl.de/.

Targets for drugs have so far been predicted on the basis of molecular or cellular features, for example, by exploiting similarity in chemical structure or in activity across cell lines. We used phenotypic side-effect similarities to infer whether two drugs share a target. Applied to 746 marketed drugs, a network of 1018 side effect-driven drug-drug relations became apparent, 261 of which are formed by chemically dissimilar drugs from different therapeutic indications. We experimentally tested 20 of these unexpected drug-drug relations and validated 13 implied drug-target relations by in vitro binding assays, of which 11 reveal inhibition constants equal to less than 10 micromolar. Nine of these were tested and confirmed in cell assays, documenting the feasibility of using phenotypic information to infer molecular interactions and hinting at new uses of marketed drugs. "

Our knowledge of species and functional composition of the human gut microbiome is rapidly increasing, but it is still based on very few cohorts and little is known about variation across the world. By combining 22 newly sequenced faecal metagenomes of individuals from four countries with previously published data sets, here we identify three robust clusters (referred to as enterotypes hereafter) that are not nation or continent specific. We also confirmed the enterotypes in two published, larger cohorts, indicating that intestinal microbiota variation is generally stratified, not continuous. This indicates further the existence of a limited number of well-balanced host-microbial symbiotic states that might respond differently to diet and drug intake. The enterotypes are mostly driven by species composition, but abundant molecular functions are not necessarily provided by abundant species, highlighting the importance of a functional analysis to understand microbial communities. Although individual host properties such as body mass index, age, or gender cannot explain the observed enterotypes, data-driven marker genes or functional modules can be identified for each of these host properties. For example, twelve genes significantly correlate with age and three functional modules with the body mass index, hinting at a diagnostic potential of microbial markers.

my.microbes.eu: the study aims to provide new ways of analyzing any person's gut microbes in the context of samples from many individuals around the world. Visit the website if you wish to donate or participate.

Much of a cell's activity is organized as a network of interacting modules: sets of genes coregulated to respond to different conditions. We present a probabilistic method for identifying regulatory modules from gene expression data. Our procedure identifies modules of coregulated genes, their regulators and the conditions under which regulation occurs, generating testable hypotheses in the form 'regulator X regulates module Y under conditions W'. We applied the method to a Saccharomyces cerevisiae expression data set, showing its ability to identify functionally coherent modules and their correct regulators. We present microarray experiments supporting three novel predictions, suggesting regulatory roles for previously uncharacterized proteins.

Physical protein-protein interaction (PPI) is a critical phenomenon for the function of most proteins in living organisms and a significant fraction of PPIs are the result of domain-domain interactions. Exon shuffling, intron-mediated recombination of exons from existing genes, is known to have been a major mechanism of domain shuffling in metazoans. Thus, we hypothesized that exon shuffling could have a significant influence in shaping the topology of PPI networks.We tested our hypothesis by compiling exon shuffling and PPI data from six eukaryotic species: Homo sapiens, Mus musculus, Drosophila melanogaster, Caenorhabditis elegans, Cryptococcus neoformans and Arabidopsis thaliana. For all four metazoan species, genes enriched in exon shuffling events presented on average higher vertex degree (number of interacting partners) in PPI networks. Furthermore, we verified that a set of protein domains that are simultaneously promiscuous (known to interact to multiple types of other domains), self-interacting (able to interact with another copy of themselves) and abundant in the genomes presents a stronger signal for exon shuffling.Exon shuffling appears to have been a recurrent mechanism for the emergence of new PPIs along metazoan evolution. In metazoan genomes, exon shuffling also promoted the expansion of some protein domains. We speculate that their promiscuous and self-interacting properties may have been decisive for that expansion.

Since the 90's , bioinformatics research has emerged in Iberoamerica and now high quality research is done.

Training can be found at different levels:

PhD programmes exist in Brazil (since 2003) and Spain

Future offers will be available in Mexico, Chile and Guatemala

-Bioinformatics Training Network (BTN).This network comprises individuals involved in the provision of bioinformatics training. Our goal is to tackle training challenges in Bioinformatics, build pragmatic solutions to them, and provide mutual support. We encourage the bioinformatics community to join this initiative and to enrich it with their active participation.The BTN is a community-based project aiming to provide a centralised facility to share materials, to list training events (including course contents and trainers), and to share and discuss training experiences.

-How to organize a virtual conference anywhere: ten simple rules