Background: Genome-scale inference of transcriptional gene regulation has become possible with the advent of high-throughput technologies such as microarrays and RNA sequencing, as they provide snapshots of the transcriptome under many tested experimental conditions. From these data, the challenge is to computationally predict direct regulatory interactions between a transcription factor and its target genes; the aggregate of all predicted interactions comprises the gene regulatory network. A wide range of network inference methods have been developed to address this challenge. We have previously organized a competition (the DREAM network inference challenge), where we rigorously assessed the state-of-the-art in gene network inference (see our paper to learn more). However, robustness of predictions to variability in the input data has so far not been characterized.

Goal: The aims of this project are to: (1) investigate the performance robustness of top-performing network inference methods from the DREAM5 challenge to variability in the input data, (2) improve the quality of predicted networks using a bootstrapping approach, (3) generate an improved prediction for the transcriptional regulatory network of E. coli and analyze its structural properties.

Mathematical tools: This project has a computational flavor. Students will familiarize themselves (at a high level) with gene network inference approaches, ensemble based approaches in machine learning (bootstrapping, bagging), and basic network properties such as degree distribution. A programming environment such as R or Matlab will be used. Network inference tools may have to be run from the command line (Unix console).

Biological or Medical aspects: The students will predict and analyze a genome-wide transcriptional regulatory network for E. coli.

Backgroung : Our project is based on the data used in the "Dream challenge" (In vivo, E.coli,...) and on the method used by the teams having done the best predicted networks : bootstrapping! Here is a summary of what these teams have done: We took the network expression data and we performed bootstrap runs in order to have several samples that are different from the original data. We then applied inference method on bootstrap samples such as correlation and regression to obtain the prediction networks. The first best prediction fit will be then combined into one single consensus network. The consensus is the performance when combining the K network predictions from K bootstrap runs into a single consensus network (each edge is assigned the average weight across the K bootstrap runs). Bootstrapping is to turn in a non linear original data into several (100 in our case) smoothers using inference methods. An example of bootstrapping is illustrated in http://en.wikipedia.org/wiki/Bootstrap_aggregating

Goals : The best teams of the Dream challenge were using bootstrapping so we want to go further in the exploration of this method. This is why our goals are:

To see if the performance varies when we

2) change the number of bootstrap runs

Precision recall curve : To evaluate the performance of making bootstrap runs with different inference methods,... we have to create a plot in R with the precision in the vertical axis and the recall in the horizontal axis. Here are the functions: Recall = TP(k)/P where TP(k) are the true positif of our first k edges of the list and P are the positif of all the list. Precision = TP(k)/TP(k)+FP(k) = TP(k)/k

The network to analyse was network 3 (E.coli), the inference method is the correlation of Spearman and the number of bootstrap runs is 100. The only changing factor is the fraction used : 10% -25% - 50%- 75% - 100%. The red line is the result when doing the network inference on the complete dataset without bootstrapping. The blue line is the performance of the consensus network. What we see is that between 10% and 50 % we have a significant difference. The boxplot with 10% fraction shows that the all data (red line) is above the individual runs which is interesting since it shows that even when we take 10% and combine the prediction we have almost the same prediction when using the whole data. 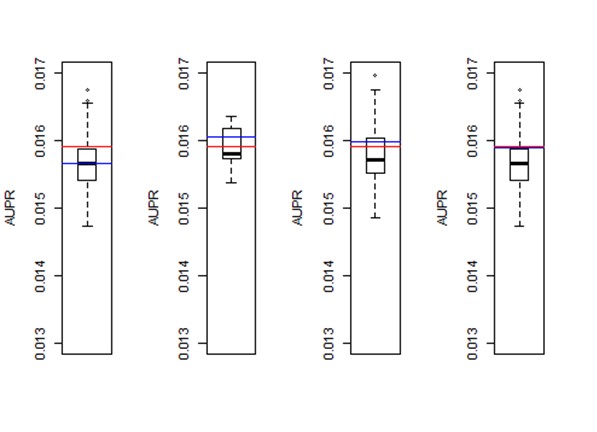 To obtain these results we used the network 3 which corresponds to E.coli ,we took 30% of this network and we had the correlation of Spearman as method for each bootstrap run. The only changing factor was the number of bootstrap runs.

Our vertical axis is the "aupr" (area under the precision recall curve) that indicates the performance. (the precision in the prediction of our network)

The red line is the performance when we take all the data without bootstrapping.

When the performance of the consensus is higher than the performance when we use all the data (blue line higher than the red line) it means the bootstrap improve the performance. It seems to be the case for the boxplot 2 and 3 but in fact these results are just random results because it's noisy. For example when we take 10 times 30% of our data at random, we can be lucky and obtain 10 pretty good results and so the blue will be above the red line or we can be unlucky and obtain 10 bad results and so the result will be the opposite (the blue line under the red line).

The only thing we can be sure is that the consensus tends toward the red line when we increase the number of bootstrap runs. 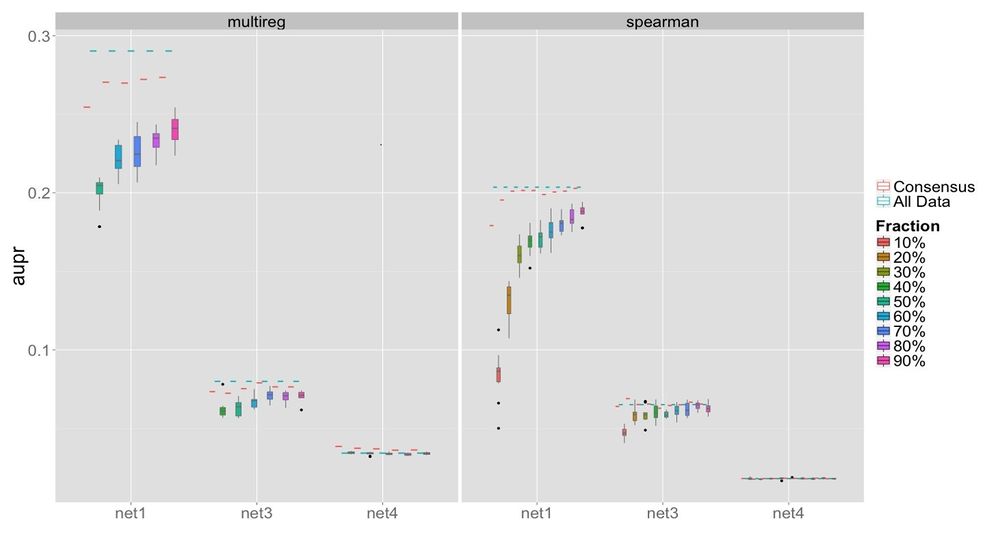 As we have said with the other results, the consensus is always under the "all data".

We can see the network 1 has always better results than the network 3 and 4 using the multiple regression or the correlation of Spearman as inference methods.

In conclusion once more, bootstrapping doesn't improve the performance in comparison of when we use all the data.

-Consensus improves over individual bootstrap runs, but does not improve compared to using all data for the tested methods (Spearman and multiple regression).

Further exploration : We could see if the performance varies using different inference methods (svm, Lasso,random forest,...) when we bootstrap the data.