by Ricardo Kanitz, based on the paper by Hernandez et al. published in Science (2011).

One of the main topics in evolution is – as it has always been – human evolution. Many new methods are applied first to humans; other methods, which are not applied there, often come to humans at some point anyway. This is particularly true in the field of genomics and it is no surprise since we are talking about our own species’ evolution. The study commented here addresses an interesting general question in the subject. How selection shaped (if at all) our genomes?

More specifically, Hernandez and colleagues are interested in the classic signature of selection in genomes, the “selective sweep”. This so-called sweep is simply the reduction of measured diversity in the (genomic) surroundings of a positively selected mutation. This is observed when (1st) a new beneficial mutation appears, (2nd) it rapidly becomes the most common variant in a population and, (3rd) because genomic positions are not physically independent, nearby positions also become more frequent. As we move further away from such positively selected position, we observe a decay of such pattern due to recombination (see cartoon below). 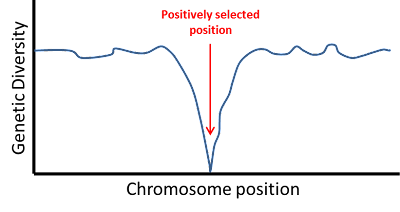 Based on functional groundings, the authors looked at different parts of the genome. They predicted that non-synonymous mutations (those which change the amino acid in the resulting protein) should show stronger signals of these sweeps when compared to the synonymous mutations. As shown in their Figure 2 (below here), there is no difference whatsoever. 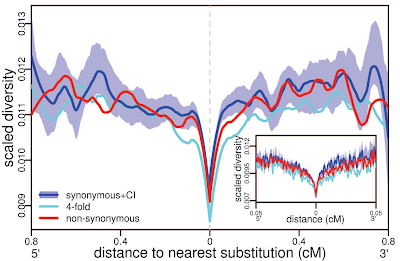 However, they do see a decrease in diversity around all these positions, which is not observed in non-coding ones (see the gray area in their Figure S5A below). 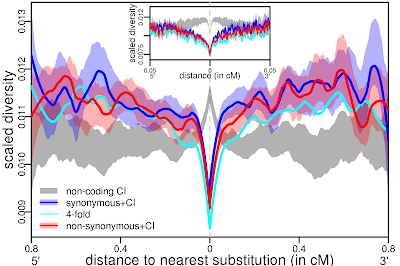 To explore this discrepancy, the authors took advantage of simulations. As seen in Figure 3A below, they simulated a neutral (i.e. control) scenario and compared it to different selective scenarios accounting for varying proportions of human specific amino acid fixations (? = 10%, 15% and 25%) as favored with different selection coefficients (s = 1% or 0.1%). In such conditions, there should be power to detect selection. Based on the fact that they do not detect it, the authors claim that selection was rather rare (with ? < 10% and s < 0.1%). Here, I must say that I found these numbers rather high and not at all conservative. 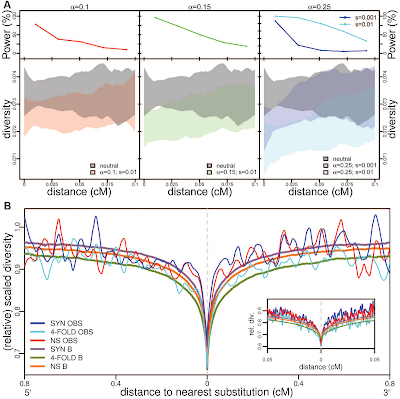 As it follows, they proposed a scenario of background purifying selection to explain the observed pattern. In Figure 3B above, they showed the fit of simulations with background selection (purple, green and orange) with the observations (dark blue, light blue and red). Such a fit appears to be very good and they conclude that the pattern they observed is better explained by purifying selection (a.k.a. strict neutrality) than by recurrent positive selection.

Finally, given (1) the fact that the observations did not fit the predictions of their (rather extreme) selection model, and (2) that a neutral model was able to explain the observations, the general conclusion is that classic selective sweeps resulting from strong positive selection were quite rare in the recent human evolution.

Although it would be interesting to see how the results would look like with lower (and more realistic) values for ? and s, this study brings about the interesting discussion of the modus operandi of human adaptation. Classical examples based on phenotypes show that humans underwent recurrent adaptations when it comes to diet, immune response and skin pigmentation. The molecular mechanisms underlying these, however, might not be as simple as the “Classic Selective Sweeps”. Complex genetic architectures linking small effect polygenic variants, for example, may lead to soft sweeps; which do not leave the same sort of signature and can easily be missed in the background noise created by the potentially overwhelming neutral evolution. Therefore, there are still many unknown features related to recent human evolution – especially concerning non-neutral evolution – and the growing availability of data coupled with better analytical methods may bring new and possibly surprising results in the coming years of scientific investigation.

The genomic substrate for adaptive radiation in African cichlid fish