From CBG
Jump to: navigation, search 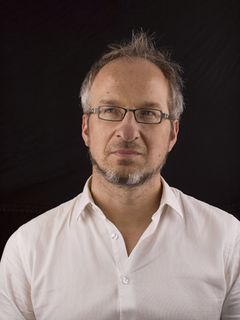 Sven Bergmann, PI
Sven Bergmann heads the Computational Biology Group in the Department of Computational Biology (formerly Department of Medical Genetics) at the University of Lausanne. He joined the Faculty of Biology and Medicine in 2005 as Assistant Professor and became Associate Professor in 2010 after successfully completing his tenure track. He is also affiliated with the Swiss Institute of Bioinformatics since 2006 and an Honorary Professor at the University of Cape Town since 2016.

Sven studied theoretical particle physics with Prof. Yosef Nir at the Weizmann Institute of Science (Israel) where he received his PhD in 2001 for studies of neutrino oscillations and CP violation. He then joined the laboratory of Prof. Naama Barkai in the Department of Molecular Genetics at the same institute, where he first worked as a Koshland postdoctoral fellow and later as staff scientist.

Sven's work in the field of computational biology includes designing and applying novel algorithms for the analysis of large-scale biological and medical data. A current focus of the lab is integrating molecular phenotypes such as gene expression and metabolomics data with genome-wide association studies. Sven also has an interest in Systems Biology, modelling genetic networks pertaining to specific biological processes. He has published more than 150 papers with >24000 citations. A list of publications is available here or at Google Scholar.

PS: Do you know how to get smoothly from A to B? Well, you just need to minimize a functional expression, see this [paper] for details!