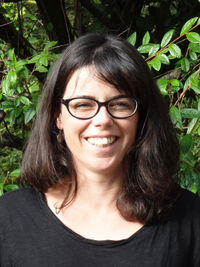 After obtaining her diploma in Chemical Engineering from the Technical University of Lisbon, Ana decided to pursue her interest in the molecular basis of human traits. In 2003, she started her PhD under the supervision of Henrik Kaessmann at the University of Lausanne. During her graduate studies she investigated the contribution of gene duplication to the origin and evolution of human phenotypes. In 2008 Ana joined Chris Ponting’s group as a post­doctoral fellow to work on the origin and evolution of intergenic lncRNAs. Her postdoctoral training was funded by SNF, FCT and Marie Curie fellowships. In 2012, she was awarded a Research Fellowship (The Royal Society) and started developing an independent research program on the biological and molecular functions of intergenic lncRNAs. Ana has been a Swiss National Science Foundation Professor since October 2014, when she set up lab at UNIL’s Department of Physiology.